Tramore-based photographer Margaret O’Brien-Moran has composed a number of photos using my poem ‘Angel’ as inspiration. The photos were on display at The Old Market House Arts Centre, Dungarvan in February 2014. You will find 6 of the photos: K-O in the gallery below the poem.

An angel showed me its wing
in a field at the back of the house.
It was leathery inside, vein-knotted,
welted with stitchmarks and scars.
There were fleas in the feathers
which it made me catch and crush.
You could feel the shafts buried
deep in the skin like great nails.

I smuggled food, ointment for the wings.
Perhaps my father wouldn’t have minded:
it was too dangerous to ask. Everyone
said we’d be better off without them.
There was talk of showtrials, mass graves,
of the need to be rid of them forever.
Some had appeared on TV, denying
they could fly, confessing to sexual acts.

The angel said it had almost been caught.
‘I sheltered in a church, but they refuse
to acknowledge us, they’re striking us
from the record, saying we never existed.’
It stayed for a month, sleeping by day.
I got used to the silhouette,
like that of a great owl or moth
beating through the woods at dusk.

At first I took the blame when things
began to disappear from the house.
When my father’s watch went missing
he forced the truth out of me.
I remember ragged shadows on the ground,
reassuring hands on my shoulder, voices
telling me I’d done the right thing,
quiet oreders given to the dogs;

how the angel stood there in the lights
and just before all hell broke loose
how it opened its mouth and sang,
small tongue oddly neat and clean.
And the awful beauty of that song,
how it seemed to have nothing
to do with anything, seemed even then
to have forgotten where it came from. 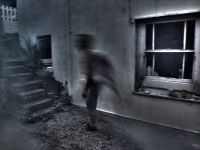 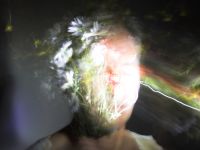